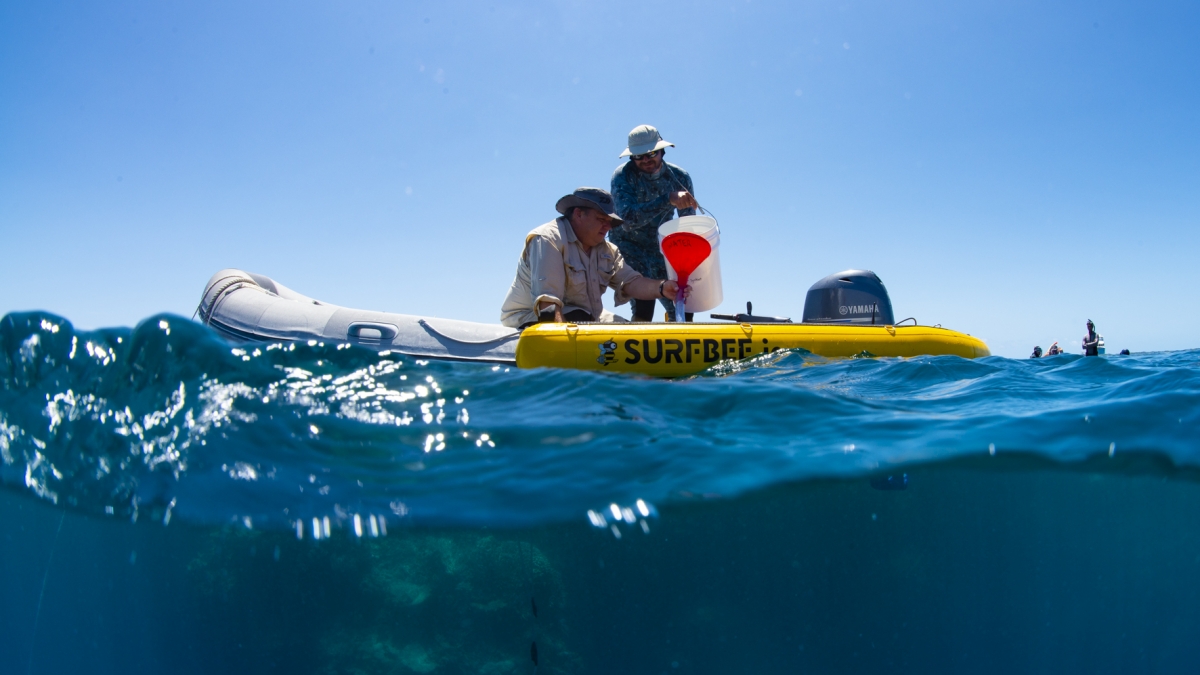 It has been described as the biggest orgasm in the world. A spectacular natural phenomenon of corals spawning in a massive and coordinated frenzy, much like a giant underwater fireworks display.

The particles floating above this branching coral are its microscopic eggs and sperm, released when the species spawns (credit Peter Harrison).

Incredibly, coral spawns only once a year, usually in late October or early November. For years, not a lot was known about the sexual reproduction of coral. Some thought that fertilisation happened within the coral, with fully formed coral babies being released, continually rejuvenating through this efficient self-fertilising process.

However, in a world-first, the Great Barrier Reef Foundation and its partners – including Southern Cross University and QUT– have successfully pioneered a technique dubbed ‘coral IVF’ or larval reseeding. It is the first project of its kind to re-establish a population of juvenile corals from larvae settling directly on the reef in the hope the coral withstands the increasing threats to the reef.

“We collect spawn from heat-tolerant corals that have survived bleaching, and rear millions of baby corals in specially designed tanks and coral nursery pools on the reef before delivering them onto target areas of damaged reefs to restore and repopulate them.”

Divers use fine mesh nets to capture the microscopic eggs and sperm that float to the surface.

The spawn is then placed in floating enclosures where they grow for up to a week before reseeding the baby corals (larvae) onto damaged reefs.

There is great promise in the mass larval restoration approach as it has the potential to make a difference to reef recovery on a global scale. The success of this research shows that coral populations where the natural supply of coral larvae has been compromised and damaged can be restored and repaired.

In another world first, robots are giving nature a helping hand by playing ‘stork” and delivering coral babies onto damaged reefs as part of the coral IVF technique. Known as LarvalBots, they are loaded with the coral larvae and cruise just above the reef, spitting out the baby coral directly onto the targeted areas.

Working in partnership with the Foundation, Queensland University of Technology’s Professor Matt Dunbabin says that the LarvalBot invention has been phenomenally successful.

“By thinking out of the box we’ve been able to combine coral ecology and robot technology to give nature a helping hand,” Professor Dunbabin says, explaining how a trial this year re-seeded an area of 3-hectares in just six hours.

“We’re also expanding the LarvalBot fleet as there’s been significant interest from around the world to use them to spread coral larvae where it’s most needed.

“We’ve also designed a new LarvalBoat inflatable system so in the future the bots can be fitted in backpacks and the two can be transported and used together.”

“We’re now looking into how we can partner with tourism and private vessel operators, acting as citizen scientists, to collect larvae and release them back onto the reef, to enable us to deploy this restoration technique across many more reef sites,” Professor Harrison says.

“The success of this innovation gives us hope for the future as it gives us a method of restoring priority reefs by re-establishing their breeding populations.”

For Great Barrier Reef Foundation managing director Anna Marsden, saving the reef is a huge task but “we’re already making an impact, and it is innovations such as coral IVF that give us hope.

“It truly is inspirational and proves what can be achieved by bringing people and science together to save our irreplaceable reef and its marine life,” Ms Marsen says.

Firetail is located on the traditional lands of the Wiradjuri. We acknowledge that sovereignty was never ceded and pay our respects to elders past, present and emerging.